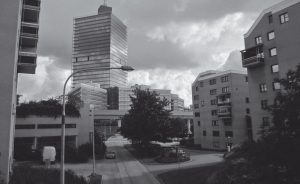 In recent years the migration of population in Bratislava is influenced by the process of residential suburbanization. While during the last 20 years the total number of city inhabitants has decreased, there is a significant increase of population in some outer city boroughs that have enough free areas for development (mainly of agricultural land) as well as still retain the rural character. As combining advantages of living in the city and in the countryside, they have become very attractive and popular in terms of immigration.

First, the comparative study analyses impacts of residential suburbanization on case of three Bratislava boroughs (Záhorská Bystrica, Vajnory a Rusovce) in which, since 1991, the number of inhabitants has increased the most. Detailed research of executed and planned residential development, considering the various qualitative aspects, have shown that all the analyzed housing projects have some common characteristics: monofunctionality (predominance of residential segment and absence of required facilities and job opportunities), insufficient transport connection by means of public transport, monotony and missing articulation and hierarchy of mass-spatial structure, spatial isolation and related social segregation, small housing plots and tendencies for increasing the housing density, construction mainly in green fields with occupation of arable land and increasing environmental load by ineffective transformation of natural environment within the outer city.

The possible solution for avoiding the above mentioned negative impacts of residential suburbanization on qualities of outer city could be the greater integration of other than residential segments within the housing areas – the mix of uses. Since the 50-ties of the 20th century, Stockholm, the capital of Sweden systematically develops the polycentric urban structure. Its strategy could be an inspiration for implementing the mixed use into residential environment in our conditions.

The main tool for implementation of mixed use in residential areas of Stockholm is a dynamic system of city planning that allows flexible reacting on actual situation and conditions as well as planning the new development in a dialog between the city, particular developers or investors and local residents.

Application of the experience and the planning system of the city of Stockholm in conditions of Bratislava could contribute to transformation of monofunctional residential satellites into the comprehensive residential environment as well spread of qualitative urban structure into the areas of outer city with the positive impact on effectiveness of land use and city operation in terms of sustainability.