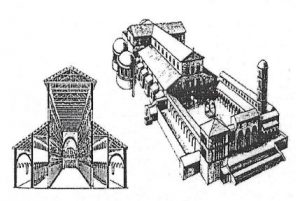 The scientific project of institutional research Nr. 40/00 deals with creation in the fields of architecture and fine arts in the period from Christian antique to Renaissance (around 1,500 years). Project aimed at investigation of the medieval architecture and art contributions, including Slovak creation, based on the analysis of previous research, published evaluations of Middle Ages and the author’s investigations. The chronological relations, evolution in the individual parts of Europe in parallel to Slovak evolution and the contribution of Slovak environment in the message of medieval period were investigated using analysis of historical facts, concrete examples and graphical documentation. The investigation focused mainly on the sacral architecture, but the living houses, public buildings and fortification structures were studied, too. Many investigated individual historical objects and complexes (historical centres of towns), constructed in the period between 12th and 16th centuries, serve their original functions even nowadays. The project resulted also in the publishing of textbook for the students of the Faculty of Architecture, Slovak University of Technology, in accordance with the topics of lectures on the history of medieval architecture and art.