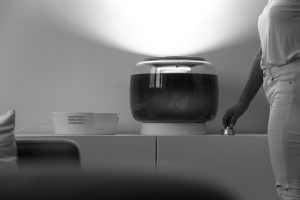 The design research utilizing microalgae biotechnology was conducted at the Institute of Design in years 2015 – 2019 as a part of doctoral thesis—Application of Microalgae in the context of Industrial Design—holistic approaches in the design process. The research focused on the implementation of microalgae Spirulina in the context of everyday objects. Microalgae constitute a potential platform that can be used in the Design for Sustainable Development due to microalgae’s promising qualities, such as multi-functionality and efficient growth. In terms of methodology, the research was based on experiments and interdisciplinary approach combining various disciplines for con­sequent application of the acquired knowledge in designing objects and services. The final outcome was generated as a result of the interaction and intersection of three disciplines – Biology, Phycology and Industrial Design.

The project was based on the collaboration with the Czech Institute of Microbiology of the Czech Academy of Sciences (Třeboň), the Institute of Biotechnology (Faculty of Chemical and Food Technology, STU in Bratislava) and also an internship with Cesare Griffa Architecture Lab in Torino.

Its core concept is the introduction of a new kind of object culture: a combination of synthetic industrially made protective case and living organisms – microalgae contained inside. From the perspective of environmental sustainability, it links local, domestic production of food with microalgae biotechnology, Spirulina microalgae in particular. Our current food production methods have considerable environmental impact, so there is room for improvement, especially with regard to the logistics of food supply and transport and food processing.

Microalgae are water-based microscopic organisms which, thanks to their simple structure, constitute a very promising material that can be used to solve specific sustainable development issues. Spirulina is one of the most studied and researched microalgae with unique nutritional composition, which was the reason it was declared a food of the future by the United Nations at the World Food Conference in 1974. From practical point of view, its advantage is the fact it can be consumed right after its filtration from water.

The first half of the article focuses on the methods used in the design for sustainable development, including the research methods, theoretical background and examples of inspiring projects. The second half is dedicated to the summary of the practical research of the author, including its outcome: Spirulina Lamp prototype.

The practical part describes individual ideas and concepts aimed at the interaction between the end user and the living system (Spirulina) in the context of urban interior design. In other words, it consisted in the search for such objects of interest, whose functionality would enable the best synergy with the nature of microalgae. The idea was to increase the added value of the products and their attributes, primarily through the utilization of the polyfunctional nature of Spirulina as a way of ensuring the maximum benefits for the end-user and the three main functions: (1) Food, (2) Oxygen, and (3) Light.

The practical research also included the creation of a series of functional prototypes (cultivators), where the goal was to verify specific ideas and gain practical experience with physical cultivation of microalgae, which was then used in the preparation of the final product.

The final product, Spirulina Lamp, is designed as a sophisticated artificial interior lighting that enables easy cultivation of the microalgae Spirulina, either at home or in restaurant interiors. The fundamental value of the product consists in the direct consumption of the highly nutritious biomass without the need for any intermediates. The added value is that the cultivator uses part of the light to illuminate the interior, thus it works as a fully effective complementary room illumination. It is the first artificial lighting of its kind that produces food for humans. The whole device is designed as part of the interior furnishings for living room or dining room areas. The product is a response to the increasing demand of the population segment that prefers sustainable, healthy and modern contemporary solutions. As a by-product, it also improves the quality of the indoor air by producing oxygen.

An important part of the device Spirulina Lamp is a biomass fertilization dish. It can be placed on a light reflector, where it separates the biomass from water in approximately ten minutes, thus making the food accessible to the end-users.

If we quantify the aforementioned benefits per one day of the operation of the device, we get the following data: (1) Food—20g of fresh Spirulina biomass (verified from the use of the prototype), (2) Light—approximately 50% of the light is released into the room, which means 3500lm per day. (3) Oxygen—25 litres of the live culture produces approximately 7.5L of oxygen in one hour.

The Prototype Spirulina Lamp demonstrates a possible way in which lighting fixtures of the future interior could maximise the benefit for humans. In particular, the interior of the future could contain more lamps of this type, which would form a consistent collection of objects with high added value.

In 2019, the prototype was tested in the domestic environment for several months and achieved the expected functionality and productivity. The project is now in the phase of a start-up (Living Elements s.r.o). It has attracted two angel investors and received a grant from Tatra Banka (More Design). The internal team consists of three people and continues the cooperation with the Faculty of Chemical and Food Technology, STU. The project won the competition—Wanna Be Start-up in 2018, in Bratislava (CERIecon Interreg) and was presented at the conference in Venice (CERIecon Interreg). In 2019, as a newly-established company, the project placed second at an international start-up competition organized by EIT Food Hub platform in Nitra. Currently, the company has applied for extra financing through SME Instrument supported by the European Commission. As the next step, the company plans to optimize the device and perform customer validation of the product on the market.