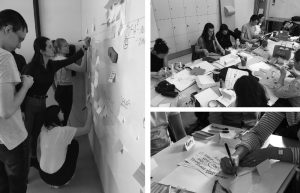 International internships, professional experience and especially the creative discourse of doctoral students, as well as the goodwill of senior pedagogues to provide space for the next generation made it possible to conduct several pedagogical procedural experiments in the design courses taught at the Faculty of Architecture and Design at the Slovak University of Technology in Bratislava (hereinafter as “FAD STU”). This article describes one of the experiments in particular, it explains how it was necessary to explain the design process to students, introduce them to various methodologies, tools, and techniques, so that they would gain a better theoretical background and understand that design—in addition to its artistic core—is also a powerful tool with a reach into other scientific disciplines where the setting of certain rules and limits does not pose a threat to personal creative freedom, but offers guidance and a useful principle for innovative thinking.

Times are changing and so is the job market. For quite a long time, the analyses of the World Economic Forum (WEF) have indicated a trend towards a reduction and even disappearance of some professions and the concurrent emergence of new ones. New key human abilities have come to the fore with the implementation of robotics and digitalization: complex problem solving, collaboration, creativity, analytical and critical thinking.

The pedagogical experiment we have been conducting and also this article focus on the so-called design thinking, developed into the design thinking methodology. Design thinking as a set of methods and workflows related to problem-solving and project based learning was defined in 2004 by the Hasso Plattner Institute of Design (known as the School of Design, d.school) founded by David M. Kelley and his colleagues at the Stanford University, USA, with IDEO, a global design and consulting company, as one of its major promoters.

The process of design thinking is directly based on the human-centred approach in design. This concept is not new. In his publication, in which he analysed the future of design, D. Norman (2017) stated: “Designers have talked about design thinking for at least half a century. It has recently been revived, in part as a marketing slogan by the company IDEO.” This approach places a person in the centre of the design process and it is based on a thorough understanding and analysis of the needs of an individual. However, the design thinking methods and workflows should not be accepted dogmatically. Creative design work is such a dynamic and individual process that it would be wrong to consider the presented methodology as the only alternative and the only right path towards an innovative designer solution. However, its basic principles follow, to a large extent, the individual phases of the design process typical of the Vertical Studios (VAT) at Institute of Design at Faculty of Architecture and Design in Bratislava (ÚD FAD STU).

The tools of the design thinking have been used within the Studio Tutorial course since 2017. They are incorporated into the design process and pedagogues use them to develop critical thinking of students. In the past methodical guidance used to be provided primarily to the studios in specialized architectural study courses. Significant changes in the development of Studio Tutorial courses did not occur until the accreditation in 2009. Then, from the formal perspective, there arose a need to extend the teaching of Studio Tutorial courses for Product Design specialization to several semesters. In order to streamline the teaching in this area, the Institute of Design has been gradually modifying the content and method of teaching tutorials. During the four semesters of the Studio Tutorial course, students have the opportunity to try out not only the principles of the design thinking methodology, but also human-centred design and teamwork with interdisciplinary overlaps.

Interdisciplinarity does not refer exclusively to teams consisting of scientists or students from different scientific disciplines. This individual approach also covers curiosity, knowledge, and skills that reach across the borders of all areas of study. In its multi-dimension nature, interdisciplinarity also covers the freedom to choose the area of interest or the subject of research, the theoretical and methodological approach, and even the institutional affiliation of researchers. Interdisciplinarity is also typical of scientific communities that respect open discussion and constructive criticism. Furthermore, it encompasses flexibility, development, and respect for the principle of freedom of research as opposed to, or in contrast with, excessive specialisation and the bureaucratization of science (Fatyga, 2014).

The implementation of design thinking methods and techniques is an experiment that aims to assist and guide the students’ designing process that is often rather intuitive and sometimes even chaotic. This experiment will also be of importance with respect to the upcoming accreditation process and subsequent more targeted response to students’ needs with the aim to prepare them better for the professional career of designers in the context of the Fourth Industrial Revolution. Therefore, both students and studio pedagogues were asked for feedback on the Studio Tutorial course and its syllabi and some of the results are published in this article.

The pandemic in 2020 has brought a lot of changes and improvised solutions into people’s lives. The reduction of personal contact, the transition from the real to the online world and the related home office work and online study are a few of the most significant ones (Marinova, 2020). Consequently, also the Studio Tutorial course has faced new challenges, gained a new dimension and has been enhanced and enriched with new tools and techniques specific to virtual space.