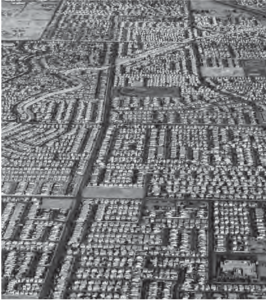 The city is regarded as the most complex physical expression of the political, economic, cultural and ecological aspirations of each civilization. The concept of the classical city must be replaced by the new idea of the metapolis. This idea refers in a radical way to the depth of changes which expose the contemporary city in an age when the shape of post-industrial society is gaining real lines. The idea of the post-urban city is concerned as a manifestation of the new liquid economy, which is based on the mobility of the information technologies on a global scale. This phenomenon is at the same time coupled with the global tendency towards the dramatic acceleration of urban development. The speed and intensity of this process has placed architects and especially town-planners into a new position where traditional urban planning techniques are considered as obsolete. Modernity has brought its own concept of the city as METROPOLIS – the urbanity which is based on the mechanistic (re)production of objects, extensive, expansionary, hierarchical and centralised growth, the city of carried out mechanistic Utopia.

METAPOLIS has become an expression for the post-industrial city. At the metapolis, we are not able to speak about a linear growth, but about the combinations and interactions of one’s territory to others, about stratifications and merging of several planes and layers. The Metapolis dissolves the traditional hierarchical and centralising structures into a more or less homogeneous network- or rhisomatic structures (the sort of self-generated structures which exist in nature, to the structures which are dynamic, unfinished, sustaining or interrupting the flows and areas which cumulate or, are (seemingly) empty). The territory of the metapolis became a complex system of simultaneous relations and events which are conditional and influenced on the basis of possible conjunctions between several layers of activities.

The contemporary urban topographies tend to root into their surrounding environment and are modelled particularly by transport and communication corridors as vectors of mobility. The liquid economy dissolves the traditional urban organism and changes it into a territory of superimposed centrality. The city starts to be described in terms of chaos theory, as a network of attractors, gravitation fields, vectors of growth and superconductive topographies, which are capable of permanent self- reorientation. The polycentric structure of cities makes it possible to face up with sudden states of instability caused by permanent fluctuation of the capital. Another important shift from the paradigm of Metropolis to Metapolis is the increase of importance from the physical to non-physical, non-material and virtual aspects of cities. Their visualisation can uncover new city maps, which can be radically different from maps rendering the physical substance of towns. The goal of this work is an attempt at some kind of cataloguing, description and comparison of the phenomena, terms and concepts which are defining and reflecting the inherence and advancement of contemporary cities.