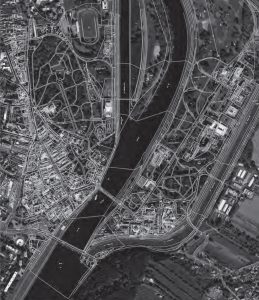 Landscape can be understood as a dynamic system with its own structure and distinct essence. The British historian F. W. Maitland compared it to magic vellum – first covered with writing, after some time erased, and substituted by new writing. These preserved imprints in the landscape represent its memory. They are formed by elements in which the spirit of human activity has been materialized. The preserved overground and underground components with certain features form a landscape identity that bears the specific quality of a civilised country. It is specified mainly by the presence of preserved imprints of cultural and historical development and the unique skyline of the country. Identification of the landscape memory facilitates revealing the relation between man and country, and thus contributes to better understanding of our history.

The essential determinants forming the landscape memory are: country as a bearer of potential, plus man or society as bearers and creators of culture in the country. Natural components are a precondition for development of specific qualities in the landscape. The more natural limitations the country has, the more distinctly man cultivates specific forms of its utilisation. Natural particularities also have an impact on a number of cultural factors, such as population density, economic activities, or cultural progress. Demographic development is one of the factors influencing the utilization of the country, too. However, the volume and intensity of migration are only the basic preconditions for developing the memory of the landscape. Another important factor is the attractiveness of the society’s culture and the extent of its implementation in the landscape. Each community or establishment in this territory represented a certain culture with its technical, social, ideological or other context.  Apart from determining an approach towards utilising the given territory, it also specified the intellectual and/or aesthetic attitude of man to the country and its values.

Development of the society was accompanied by development of its culture. The more significant the quantitative or qualitative social and cultural characteristic of a society, the more distinct and sustainable is the interrelationship between man and the country. Such a country retains its original social values over the long term, otherwise the social values are rather vulnerable.  A country with a weak expression of cultural characteristics tends more to changes, breaking the interrelations between man and the country and thus degrading its social values. Changes can not be avoided. However, their impact on the future development in the given territory is important.