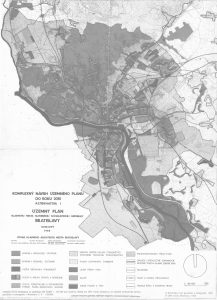 The twentieth century brought a number of twists and turns in the land-use planning of the capital city of Slovakia. The development of Bratislava was influenced by different political regimes. Along with economical changes, the regimes have left significant traces not only in the urban construction of the capital city, but also in the concept of land-use planning; thus putting into contrast the construction falling under the state control with the interests of private investors. The realized and/or failed implementations of the plans had a significant impact on the formation of urban structures. The reasons beyond were the lack of preparedness of the planning institutions, as well as economic pressure and ideological beliefs. The impacts of land-use planning have formed the shape of the capital city. The shortcomings in planning depended on the events of the 20th century, although the problems continued to appear after the year 2000. The article analyses the problems related to urban planning, highlighting negative aspects of the planning today, while using the historical context of urban planning as a supporting material. Two city districts, Lamač and Dúbravka, were chosen as examples for better understanding of this impact, shaping the urban construction of the capital city. These districts were significantly influenced by post-war planning. In conclusion, the article identifies available potential for the improvement of land-use planning documentations by pointing out the absence of zonal plans and the possible implementation of new principles in planning.