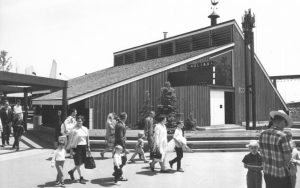 The article focuses on the situation in regional gastronomy and how it is reflected in the material culture in Slovakia—which is part of our country’s cultural identity and plays a significant role in tourism as one of its pillars. Gastronomic culture encompasses not only traditional regional dishes or drinks, but also the way they are served and the environment in which it happens, so architecture and interior design are relevant, too. The article maps the historical context, previous and current influences that have played their role in the food and eating culture in food service premises and the effect of globalization. It also explores the significance of preserving traditional local gastronomic culture as part of the concept of sustainable development of regional tourism. The main focus is on a koliba (a specific log cabin or chalet) that has historically been associated with shepherds’ culture in mountainous or highland areas of Slovakia as a seasonal dwelling for the Vlach herdsmen and has progressively developed into one of the symbols of Slovak hospitality facility for tourists. The paper is an introduction to a larger study and presents a pilot mapping of the current situation in regional food service industry as part of the research project APVV Identity SK—a common platform for design, architecture and social sciences.

Modern society is characterized not only by the expansion of education, technological progress, and the possibility of political participation, but also by revitalization of traditions and by the promotion of cultural and historical awareness of the community. People have realized that the need for national legitimacy of the society and the justification of its political organization has not disappeared due to globalization and modernity. On the contrary, the traditional culture has come to the fore and it is no longer presented only in museums, but has become multidisciplinary and appears in new contexts. It is often reflected in the contemporary architecture of the buildings in touristically-attractive regions, in the interior design, or in other forms of creative design in the broadest possible sense. Food service businesses, whether restaurants in the city or at the roadside often work with the phenomenon of the regional identity and in addition to the quality food, they also try to present the local traditions to their visitors. This article focuses mainly on koliba as a part of the shepherd’s culture and of current Slovak food service industry, which became a general representation of our cultural heritage and a part of our invented national identity. The aim of this initial study is to point out this phenomenon.

During the era of the first Czechoslovak Republic, some restaurants already had the so-called typical Slovak specialities on their menus. However, the key period that contributed to higher popularity of these dishes was the end of the 1950s, when tourism experienced its first significant development, with the focus mostly on promoting the natural beauty of Slovakia to both domestic and foreign guests. The growth of tourism was also associated with the effort to draw attention to the national cuisine as an important element of culture. All these efforts supported the idea that anything typically Slovak is would be associated with the culture of mountainous regions and sheep farming. The first appearance of “salaš”, a building similar to koliba, used for hospitality purposes, probably also contributed to this phenomenon. It was located in the village Dechtáre near the lake Liptovská Mara close to the main traffic route, and with its folk architecture and traditional dishes on the menu, it presented the typical and unique elements of Slovak culture. Its success among both foreign and domestic visitors triggered the so-called “salaš-mania” in the 1960s—the construction of various hospitality facilities, named after the original buildings of shepherds—“koliba” or “salaš”, or even “zbojnícka koliba” (outlaws’ log house) to increase the attractiveness. The paradox of the time was that the construction of these facilities often happened without any concept, often in regions where sheep farming was not common.

“Folk architecture is one of the most significant manifestations of the Slovak traditional culture. Its regional forms were created across the whole territory, with more or less common elements that reflected the skill and the artistry of our ancestors.” Salaš and koliba as well as other village buildings related to breeding and housing of sheep or cattle, are a part of the typical cultural landscape of Slovakia, especially in the mountainous locations. The deep relationship with the vernacultural objects is exactly the area where we can find the root of the natural attractiveness of these objects for general public. They have an air of nostalgia about them, associated with the old regional traditions in architecture and crafts.

The traditional regional identity is therefore presented in the architecture of buildings, in the design of their interiors, as well as in the range of meals and services offered. A separate phenomenon is the decoration of interiors, with the typical use of objects of folk culture but also naive contemporary art, etc. Sometimes, the result is pretty balanced, sometimes less so. It is important to always consider the regional specifics in each area and to examine in depth the traditional cultural expressions of previous generations. Only in this way is it possible to sensitively enter the locality with one’s authorial work, to support its regional identity by various means of expression and to prevent various misinterpretations of cultural heritage.

The text analyses the available sources on the topic of regional identity in restaurants and further develops the topic of culture in food service industry and the design of restaurants. It is an introduction to a more complex study of foods services as the key to preserving and maintaining regional identity in material culture. The next step of study is an in-depth research of selected hospitality facilities and of various approaches and strategies in presenting regional and local identity, which will represent a certain regional food service culture and be processed into case studies as examples of a good practice.