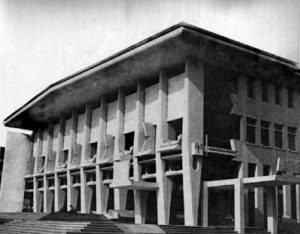 In 2006, the University of Chicago Press was publishing a solid study, lavishly illustrated, entitled When buildings speak. Its author, Anthony Alofsin chose this metaphoric title to treat of “Architecture as Language in the Habsburg Empire and Its Aftermath, 1867-1933”. Teasing identity as a methodological bias in studying Central/ Eastern European architecture was not a new approach, as scholars like Friederich Achleitner and Akos Moravanszky had already investigated this perspective in several works. What strikes in Alofsin’s book is the way “meaningfulness” turns into a crucial concept in decoding an architecture which has but a “limited ability to speak to us now”.  By translating the trope of the herderian national theories – all national culture is based on a specific language –, Alofsin succeeded both to introduce the Western reader to the largely unknown architecture of Central Europe and to confirm the marginal position of this latter which – once again – needed a code in order to be understood.

This was the predicament that faced generations of architects and ideologists from Eastern Europe in general, who were eager to build up a (meaningful) place for their nation on the geopolitical map.

This paper will look at how ‘tactic narratives’ came to inform in a significant manner architecture – and consequently its historiography – in Eastern Europe. Thus, I will explore ‘meaningful’ architecture, with a focus on identity/ identification issues. Without ignoring the importance of the “historic” examples of such an architecture, as well as its very recent recrudescence, I will treat the socialist years as a counterpart. By doing so, I will question the applicability of concepts such as ‘meaningfulness’ outside the usual territoriality of identity. Ultimately, I am interested to analyze what are the most appropriate historiographical tools in dealing with Eastern European architecture.