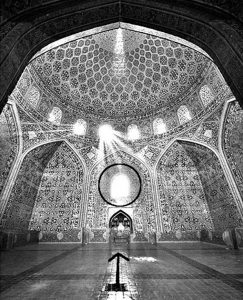 The genius of the Iranians in developing environmentally friendly architectural techniques created works of architecture in the deserts of the country which are masterpieces not only from an aesthetic point of view but also from an engineering point of view, and, centuries later, are still highly valued by researchers in various scientific and artistic fields. Directing light into the interior spaces of mosques has always been one of the concerns of Iranian mosque architects. In addition, in Iran’s hot and dry climate, the long hours of sunshine during the day have been one of the motivations for innovations in the natural lighting of mosques. Therefore, the main focus of this article is “the role of light and the use of each of the lighting elements in the shaping of the interior of mosques in the hot and dry climate of Iran during the four historical periods of Islamic architecture.” This issue is explored through theoretical and case studies.

Since the advent of Islam to the plateau of Iran, there have been many mosques in the country’s desert areas that were destroyed or have undergone fundamental changes. So, the selection of eighteen examples studied in this case study was made based on the following criteria: Firstly, adequate information should be available (mainly sufficient images and plans); Secondly, the mosque’s construction should reflect the salient features of the architecture of the relevant historical period. Among the various lighting methods, the most common of all the lighting elements are described in the theoretical foundations of the research. Then, in the case study section, based on plans and visual information of mosques of each period, the application frequency of each element has been measured and evaluated at four levels. The results of the case studies are presented in the form of tables and graphs. Finally, after trend diagrams connecting the points were created, the tendency to apply each method can be seen, and in the interpretation of the diagram, the causes and factors that shaped the trend are addressed. This method has also been combined with the other descriptive methods in similar researches.

Since this research studies mosques located in Iran’s hot and dry climate, naturally, the geographical area studied in Iran is often the country’s central region. On the one hand, there is no information on the buildings of all mosques located in the area. On the other hand, during the relevant historical period (from the beginning of the Islamic period to the middle of the Qajar period) which covers more than a thousand years, many of these buildings fell into ruin or underwent significant changes. In view of this fact, the best surviving examples have been selected based on the available images, documents, plans, and building information and classified based on the historical periods of Islamic architecture. According to the classification of Iranian Islamic Architecture Historians, Islamic architecture in Iran can be divided into four main styles: Khorasani, Raazi, Azeri, and Isfahani, corresponding to critical historical periods: early history, Buyid and Seljuks, Ilkhanate, Timurids and Muzaffarids, Safavid, Zand and Qajar.

Innovations of techniques and methods of providing natural light in the design of the interiors of mosques in hot and dry climates led to the creation and evolution of elements that the Muslim architect can combine to create a spiritual atmosphere emphasizing the dignity of the owner of the building; an environment that, while protecting from the glare of the desert sun, is a refuge for the worshipers, with mosques as houses of God on earth. In order to abide by this obligation, Muslim architects tried to draw all the attention to Allah by creating centrality in the building and the connection between the outer and inner space through natural light.

It is worth noting that daylight has been used to meet human beings’ basic needs, but these methods have been intensely used to induce the sense of sincerity, innocence, insight, and spiritual purity in the interior spaces. To achieve that, elements such as Iwan, Shabaak, window, Rowzan, and Horno were implemented. Furthermore, some elements, such as windows, could balance ventilation and provide light at different hours of the day. In different seasons of the year, other elements, such as Shabaak, ventilated and filtered light at different times of the day so that it could shine in the heart of darkness with eye-catching forms. One of the factors considered by Iranian architects, especially during the Safavid era, is the observance of the hierarchy of light. For example, a person who enters Sheikh Lotfollah Mosque, while being impressed by the whole space and the way the lighting inside the building is filtered with natural light, also realizes the presence of God. The design of the space with changes in respect to the proportion of space, light, colour, and other elements involved in the architectural space encourage the visitor to feel spirituality and attain divinity. Thus, in addition to their material function against light, lattice walls, openings, and apertures in the architecture of mosques in hot and dry climates create a unique situation for the Muslims who realise their mortality before the Almighty God.