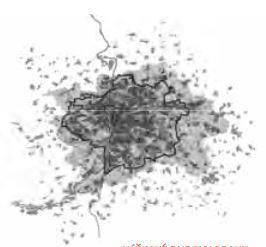 Globalization is still an unfinished, spontaneous and uncontrolled process of increasingly intensive integration of countries of the world in a single economic system, which occurs since the seventies of the twentieth century. (Mezricky, 2006a; Sykora, 2000). Globalization affects all disciplines, including architecture and urban planning. One of the aims of the research is to find out how the process of globalization affects the appearance of Prague. “Globalization leads to a redistribution of power from national governments to multinational companies, from public to private sector. The still growing voices point out that at present, the real power is concentrated in the hands of multinational companies.” (Sýkora, 2000:11)

The common characteristic feature of influence of globalization is the relationship to the city. Globalisation closes the city parts into their own introverted world, they are showing their backs to the rest of the city. This leads to formation of empty spaces, deaf holes and inner peripheries in the city.

Another characteristic feature is predetermination of these parts for a certain group of people. Skyscrapers and administrative complexes are for people working there, shopping malls for people shopping there, residential zones and suburbia for people living there.