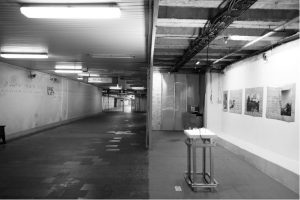 Initial impulse for this text was long-term observation and conviction, that man-made part of our environment is constantly losing its identity. The newly built structures are just very average, lacking any ambition to experiment. The old structures are disappearing and if they are not demolished, they are neglected and forgotten.

Koolhaas’s text Generic City, published in the S,M,L,XL, introduces a city, which is the most general repetition of other cities, and is a bearer of non-identity. An interview, which was published in Wired magazine “From Bauhaus to Koolhaas” one year later, supplements these notions in more civil language. A parallel between the Koolhaas’s city and the today’s Central European environment doesn’t lay in its size or vividness; it can be seen as emptying / loosing its identity.

Independent cultural centers are institutions, which produce and present the contemporary culture. They were built on civic basis. They preserve and produce identity: apart from basic architectural layer (preserving and using of the original historical buildings), they produce new identity, a sort of non-built kinds of culture. It is ideal to define the new character, history and identity in the way Goethe and Nietzsche indicated it, when they said, that we must despise and reject everything that subdues our creativity and activity, even if that means despising our history. The ideal is the opposite – we should seek for everything that makes us vital. Independent cultural centers produce something that is important for us, if the society wants to grow. The benefit of independent cultural centers in comparison to other parts of civic society is the fact that identity is active in physical and virtual environment, that it leaves record, trace and cumulates critical mass of people, who represent an assumption that sustainability will endure and expand.