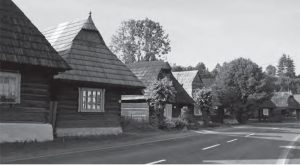 An increasing density of rural settlements is a known phenomenon in history. This article presents domestic and foreign examples of a density increase, theories, methods and reasons in terms of sustainability. It usually used to happen because of heritage division or because various regulations on the protection of natural resources. An example is a regulation from 1767, which forbade building up in specific areas of a village within the whole Habsburg monarchy. Interests for increasing density might be various, but what is important is that those interests lead to social welfare.

The article also shows legislative barriers and conflicts within contemporary social trends. Zoning plans provide lots of sites for development, which result in the waste of soil, a very limited and irreversible natural resource. Due to the global economic relations, agricultural land is used as the cheapest building site for “commercial waste of the consumer society.” Building Act does not distinguish between urban and rural environment. Current legislation is applied generally in every situation, regardless of scale or traditional development systems.

Second part of the article focuses at students’ projects within the Urban Design II course, where students tried to raise density in a particular area and upgrade it, too. Increasing density in our social environment might seem like an urban utopia which is not based on a social demand. But it is one of approaches to sustainable development of suburbs and rural settlements without using more land, particularly in areas with limited development (national parks, PLA, etc.).