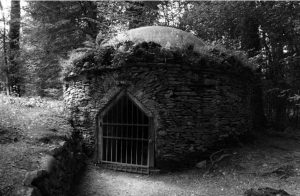 Grotta is a ‘small-size architectural phenomenon’ characteristic of garden design within many historic styles; it is also a typical part of historic gardens and parks. However, grottas have not been given enough attention as part of historic parks and gardens in Slovakia yet.

The influence of grottos and their environment is a phenomenon, which has inspired many artistic interpretations.  In garden design and architecture, grotta represents the aesthetics of the ugly, weird or bizarre. The lack of understanding of wider cultural context of its use and without knowing its many symbolic meanings, grotta is very often misunderstood as an architectural feature. The aspect of such ‘misunderstanding’ could also be a reason why such small architectural features decay in many historic gardens and parks in Slovakia.

Some grottas disappeared together with the decay and rebuilding of gardens and are known only thanks to literary works or art works, as, for example, those in the Lippay Garden and the Erdődy Garden in Bratislava. The grottas, which have been preserved up to present, represent unique artifacts of garden architectural features, which convey spiritual, notional and symbolic legacy of the past generations and are an inseparable part of historic gardens and parks.

A real beauty of some grottas can be admired because they have undertaken a competent reconstruction; the examples include the grotto ornamentation of the terrene hall in the Červený Castle or a grotta in Dubnica nad Váhom. The remains of some grottas have been preserved – such as those designed by the respectful landscape architects of the time – Bernhard Petri designed the grotto in Voderady, and Henrich Nebbien in Dolná Krupa.

Therefore, the reminder of cultural and historic context of  the ‘grotto art’ as well as of examples of successful artistic and craftsman reconstructions of these ‘strange’ features can become an inspiration for resurgence of their value, which can, eventually, protect them from decay and disappearance from the historic gardens and parks in Slovakia.