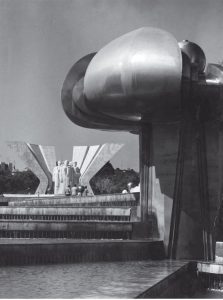 In this case study, we focus on the area of the Freedom Square (Námestie slobody) in Bratislava as an important historical urban space. In the past, several political regimes with various ideological backgrounds tried to adapt the square to their representation and reshaped its topology accordingly. A wide span of different aesthetic models of official architecture and art went through this public space. These transformations were adopted in relatively short sequence of time-periods and thus the square was expected to play an important role as public medium representing power. It was also a complementary component to public spectacles staged by authoritarian regimes.

Transformation of the today´s Freedom Square towards a representative public space begun after Bratislava became the regional capital city in the first Czechoslovak Republic. It later became stage of mass public events of the fascist regime of the Slovak State, which orchestrated prestigious architectural competition for plans for a new governmental district in this area. This event meant direct three-way confrontation of Functionalism (legacy of inter-war Czechoslovakia), architecture of the Third Reich and Italian Rationalism. Although ideologically antagonistic, the after-war communist regime used the square in a similar way for public events, and adopted the aesthetic model of Italian proposal for its plan of a university campus. But its gradual development took discursive significant detour during the Stalinist era, where proposals for construction of eclectic palaces in Soviet fashion were promoted. After several artistic/architectural competitions in the next decades, the square got its ultimate shape of a public park only in 1980s, at time when the formal ideological narrative was mere coding concealing pragmatic nature of the late-socialist regime.

Since 1990s the square remains the largest public space in the city, as a consistent record of previous regimes and their aesthetic models. Concerning this space with an open range of potential development scenarios, most common questions concerning contemporary public space in cities that undergo transition from socialism towards market-economy and democratic society can be applied.