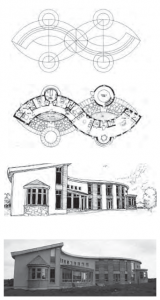 Human perception is a complex process which mostly takes place on unconscious level. Organs of sight play the major role in perception of the space around us. New field of study– neuro aesthetics is a link to understand the incoming images and reactions in our brain. In this context the significance of fractal and sacred geometry structures as initiators of healthy biochemical body production should be stressed. Fractals are common in nature, visible for example in snowflakes or in human air sacks. Their principle is evolving by recursive repetition of an algorithm and therefore creation of self-similar references of great variety. We can perceive the loss of fractal structures for example in urban planning of a concrete block of flats (lack of size variety). As we continue further to architectural scale it is necessary to mention the matrix for almost every natural fractal. No wonder that this can be found as phi or Golden mean ratio (1:1,618…). This number represents the essence of harmonic structures including sacred geometry as a system of life creation. Fibonacci sequence frequently presented in nature (rose bloom, cephalopod Nautilus) deals with approximation to Golden mean and is often visible in the form of the Fibonacci curve. The Pythagorean geometry (as an interpretation of sacred geometry in Euclidean space) appears in its basis in simple forms with strong metaphysical meaning. Starting with point and circle we can continue with special shape of Vesica Piscis through pentad and its star fractality on a way to infinite possibilities. Famous symbol in art and architecture the Flower of life gives the geometrical opportunity to transform itself to five Platonic solids (matter creation). If all the above mentioned is purposely worked into architectural design with sensitive holistic approach then a space full of life force is created. The positive impact to human body could be measured and scientifically proven.