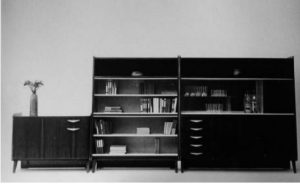 Our research concentrates on production of Slovak national furniture enterprises, which in 1958, when there was a statewide reorganization of industry, underwent fundamental changes, enabling them to proceed to innovation of their manufacturing schedule.

The dynamic development of new types of furniture was powerfully determined by the mass construction of apartments launched at the end of the 1950s. In an attempt to make the construction of settlements maximally effective, apartments were standardized, with emphasis on the functional difference of the individual apartment zones. Designers subsequently responded to these changes with designs for practical, functionally variable furniture sets.

Also of interest to our enquiry was the way in which development proceeded and the process of bringing new types of furniture into serial manufacture, and the significance of design in this process. We investigated production of that period mainly in the production of the companies Vývojový závod nábytkárskeho priemyslu in Bratislava and the internal development of products in selected national enterprises – Mier Topoľčany, n. p., Nový domov Spišská Nová Ves, n. p., Tatra nábytok Pravenec, n. p. and Západoslovenské nábytkárske závody, n. p. The usual procedure was creation of four to five prototypes yearly, which subsequently underwent technical and usage checks, resulting usually in one approved prototype per year. From the standpoint of centrally directed furniture production, design had only a secondary role in this process, the principal concerns were fulfillment of the plan and keeping within the economic limits. It is somewhat paradoxical that the design level of the standardized furniture was relatively high.

A turning point occurred around the year 1955, together with the introduction of what were for that time formally progressive furniture sets. In catalogues of that time one finds modern component furniture, multifunctional bed units and new types of seating and tables. Apart from the furniture standard, which form adhered closely to basic industrial norms, designers showed more firmness in their artistic opinions, especially with individual items of seating and tables.

Our attempt was to indicate the significant difference between the serially manufactured furniture and types with original formal resolution which in most cases remained at the prototype stage, despite the fact that formally they met all criteria for effective industrial manufacture. These latter were furniture types which design moved local furniture production closer to current design trends in the world, with inspiration from the Scandinavian and American settings being particularly evident.