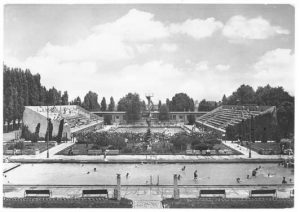 The development of modern sports in the former Hungary began in the middle of the 19th century. One of the oldest sports in Bratislava is horse racing, which was organized in Petržalka as early as in 1826. In 1839, Bratislava residents founded the Horse Racing Association, and gradually various other sports and physical education associations began to emerge. Both in the city and on its outskirts, several sports grounds were created, large and small, although most of them were only minor landscaping creations or temporary wooden stands. The first regulatory plans did not yet account for this typology, and the sport and recreational function was provided for mainly through the design of city parks, gardens and other green areas.

More significant development of sports in Europe, as well as in Czechoslovakia, began after the end of the First World War. Even in this period, architects and urban planners in Bratislava identified with the idea of developing sports facilities near the Danube on the right bank of the river, but several of them were already considering the creation of another sports center in the eastern part of the city. The visions of the transformation of Petržalka into a sports center of Bratislava in the newly established Czechoslovakia were thus even more significantly reflected in its construction development. From 1923 until the beginning of the Second World War, several important sports facilities and grounds in the waterfront zone were realized, such as a football field and tennis courts for the ŠK Bratislava club, the Lido natural outdoor swimming pool and two rowing club buildings.

After the annexation of the right bank of the Danube and the Devin forests by the Nazi Germany, Bratislava lost most of its recreational areas and almost all sports grounds. The city council designated the location of Tehelné pole for their new construction, where a large summer swimming pool had already been under construction since 1938. In addition, this flat area was still sparsely built-up and relatively well accessible from the center. Before long, therefore, they started the construction of the so-called all-sports stadium, open-air artificial ice rink, tennis courts and the Stadium of the German Physical Education and Sports Association. During this period, the city also planned to build several swimming pools in other parts of the city, but due to the war events, these plans were not implemented. In the first years after the war, the city initially continued with the construction of sports facilities in the area of Tehelné pole that had been either already planned or under construction. Shortly afterwards, after the change of political regime in 1948, sports became an important public interest and an aspect of the planned economy, which allowed urban planners to design large sports and recreational areas. In the first post-war directive plan, architect Milan Hladký designed sports and recreational facilities for the individual sports stadiums located in different city districts, as well as for three concentrated sports and recreational areas. He also designed a new sport complex in the western section of Mlynská dolina, but this idea of the third sports center was eventually not implemented. Therefore, the north-eastern embankment of Petržalka and the area of Tehelné pole remained the main sports centers in the city. Furthermore, a new indoor Športová hala Pasienky (Pasienky Sports Hall) was built and the new urban planning concepts for both areas included also the construction of larger-scale bodies of water intended for natural swimming pools. During the construction of the Petržalka housing estate, the need to modify the Danube floodplain and use it for sports purposes began to be increasingly emphasized.

After 1989, the transformation from state-planned to market economy had a profound effect on the architecture of sports facilities. Despite the valid zoning plans, which defined the size and location of sports areas, many buildings disappeared, or adapted their operation to commercial use. Sports facilities have gradually found themselves in a situation where they were not used primarily for sports, but for “additional” services of the gastronomy industry, or for cultural and other commercial events. Although this was a natural reaction to the social demand associated with the increase in the quality and complexity of offered services or the opening of the previously closed facilities to the public, it also involved the advancement of commercial interests and privatization of the formerly public spaces.

However, the lack of sports facilities in the city, which is also acknowledged by the valid Bratislava zoning plan from 2007, is at least to some extent compensated for by smaller investments by the city district councils or sports associations. One of such successful projects is the JAMA park designed at the place of the demolished cycling stadium, which preserved the original terrain modeling with a trace of the old track and, at the same time, gave the whole park a contemporary, urban-like appearance. It is one of the first of such projects in Bratislava and it shows us a potential direction of the development of sports grounds in the city, which can retain their original content and, at the same time, still fulfill their urban and public functions.