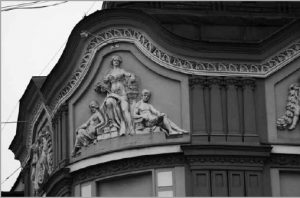 The turn of the 19th and the 20th century was a turbulent time in terms of political and social situation, as well as cultural development. There was no single style in architecture, but a great array of them reaching from historicism, through vernacularism to art nouveau. For the architecture, it was essential to be ornamental and filled with inert meanings, as well as to be built in the shortest time and at the lowest cost possible. Demands on promptness and effectiveness of building production without the loss of its contentual qualities affected every aspect of it’s production. This led to discovery of new new building materials and techniques. Ornament, considered to be a primary bearer of meaning in architecture, was affected by change in composition of stucco mass. By replacing the marble powder with plaster, the cost of stucco decorative elements reduced significantly, which led to its broader use. The article offers cross-section of communication forms of bank buildings built between 1900 and 1918 in the territory of current Slovakia, reaching from the buildings of central state bank to small local institutions with regard to the authorship, political and economical situation, capital means and social and cultural environment.

At the turn of the century, bank buildings as a building type were derived from an urban apartment house with shops on the ground floor. For this reason, it was necessary to convey their particular function to the public. This was possible either by placing the building in the significant spot within the urban structure, emphasizing it by architectural means or by the inscription with the institution’s name. However, probably the most significant was its decoration. As the bank buildings should be perceived primarily as representative concepts of architecture, their decoration needed to clearly convey information about their values, origin and main activities. First mean of achieving this was the choice of an appropriate style. The institutions which wanted to stress their tradition usually chose historic vocabulary. The ones that wanted to be perceived as modern preferred art nouveau. In other cases, the expression of a national origin of the institution was the most important message. For this purpose, usually a national type of art nouveau or vernacular inspiration were employed. Another way of referring to a national background of the institution was the choice of the architect. There were also particular decoration elements, that served as transmitters of meanings in architecture of bank buildings. Such were Mercury – the good of banking and commerce; Chronos – god of time; beehives and bees – symbols of economy particularly used in connection with savings banks; lions referred to power, majesty and royalty; laurels – success; flower and fruit garlands – fruits of labour; chubby children – prosperity and carelessness. In other cases, architects decided to refer to particular activities that banks promoted by employing allegorical figures such as Commerce, Industry, Agriculture, Labour or Industry (lat. Industria). Architects used this sign language based on subjective evocative symbolism to distinguish the bank buildings from less significant structures and to promote them as powerful and reliable enterprises.