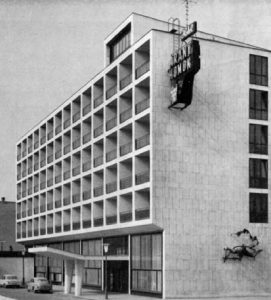 At the second part of the 1950s – after the short but impressive period of socialist-realism – Hungarian architecture returned to modernism. In consequence architects had to reinterpret the old cultural demand of “socialist in content, national in form”, which was reaffirmed by politics, and they had to define their relationship to modernism within it. When in December 1954 Khrushchev announced the need for a change in architecture he referred to modernity: he stressed the power of technology as a means of industrialization, prefabrication and standardization. Hungarian architects – while also celebrating modern technology – focused not on quantity but on the problem of modern architecture’s national features and on the ‘advanced’ traditions, whether they should or shouldn’t be adapted.

In the period of a temporary political uncertainty and of gestures of détente controlled discussions were accepted. The paper investigates contemporary debates of the theme on political, professional and public level, and analyses some buildings and their reviews. Finally, it raises some possible interpretations of the leading opinions: 1/ Were they an attempt to catch up with contemporary western modern architecture 2/ Were they a kind of resistance to universalizing tendencies of modern architecture or 3/ Can we evaluate them as ‘situated modernism’[1], or as an ‘alternative modernity’[2] born on the periphery?