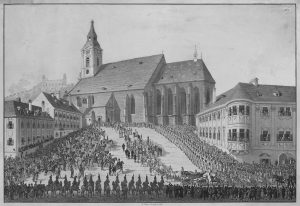 The study focuses on the great fire of the tower of St Martin’s cathedral in Bratislava (formerly Pressburg, until 1919) caused by lightning on 12 June 1833 that completely destroyed the roof of the cathedral tower. In addition, the fire endangered not only other parts of the cathedral and buildings in its vicinity, but also the whole town of Pressburg. In the paper, we precisely follow the progress of the fire in detail and present new important facts found in unpublished archive materials.

Until 1833, the St Martin’s Cathedral was adorned with a tall tower with a distinct roof covered with partly gilded copper sheet. At the top of the tower, there was a sizeable model of the so-called St. Stephen’s crown, which was from 1765. The roof of the tower was constructed during a renovation of the cathedral’s western facade and the tower in the 1760s based on the project of the chief architect of the Hungarian Royal Chamber, Franz Anton Hillebrandt.

The roof was destroyed by fire during the night from 12 to 13 June 1833. Several contemporary written testimonies about the fire offer the following information: lightning struck the tower on 12 June at around 10 p.m. and even though people at first thought that the tower was not damaged, after a few minutes they saw the flames that, at that stage, could no longer be extinguished. After the burning roof collapsed in front of the northern entrance to the cathedral on 13 June around 1 a.m., a huge fire emerged on the tower and people worried about its possible spreading. Fortunately, the fire was contained, and the big roof of the cathedral and the surrounding houses were saved. Furthermore, the walls of the tower, the tower clock and bells the cathedral remained intact, which was considered to be a “true miracle”.

In addition to the written testimonies, we have also one graphical representation of the fire at our disposal: the horrors of that night were captured by an unknown artist on a shooting target that is deposited in the collection of the Bratislava City Museum. The oil painting on wood is from 1834 and it depicts the moment of the collapse of the burning roof in front of the northern entrance to the cathedral.

The paper also covers some details of the fight against the fire and its context. Apart from the members of some guilds that in that period had the obligation to fight fires and protect our towns from possible spreading of fires, a huge role in the saving of the interior of the tower was played by the cathedral chaplain, Karol Scherz de Vaszója, later on known as a philanthropist. Bishop Alexej Jordánszky immediately after the fire donated 100 guldens of the so-called conventional currency for the restoration of the damaged roof.

The fact that the fire did not cause any major damage was an especially positive outcome for the whole town and that is why on 23 June 1833 a three-hour ceremony was served in thanks to God for the merciful diversion of the danger. During the celebration, priest János Hollósy, in an interesting homily, contemplated on the progress of the fire in the context of other Pressburg catastrophes.

A temporary roofing of the tower was built in the form of a rather low pyramid roof (works started after the fire and continued till the end of July and the beginning of August), which can be seen on several depictions of the cathedral and vedutas of Pressburg from the 1830s and 1840s.

From the perspective of “the history of ordinary life”, the fate of the remains of the copper sheet from burnt roof is also interesting: immediately after the fire they were collected and officially weighed, and then auctioned in a public auction on 16 December 1833 – “the owner of a copper workshop Mr. Mayer” bought approximately 2,856.3 kilograms of non-gilded sheet and “a goldsmith Rapp from Győr” bought approximately 99.1 kilograms of gilded copper. Furthermore, the pieces of coal from burnt wood from the roof frame beams were bought by Vavrinec Libisch, a stringer of gold and silver wires and a member of the so-called extended town council.

People in charge of the cathedral certainly worried about another fire of the cathedral’s tower and possible occurrence of a similar danger that could happen again, any time. That is probably the reason why multiple fire-fighting units were placed in the St Martin’s Cathedral during the fire of Michalská Street in 1842. Installation of a lighting conductor on the top of the tower during the great renovation of the western facade and the tower in the 1840s was a very important step in a series of safety measures adopted in order to protect the cathedral against devastating effects of lightning. At that time, conductors were not a technological novelty anymore, but quite common equipment of important buildings, which is documented in several contemporary reports about installation and repairs of lightning conductors that were used in our region from the second half of the 18th century.

Based on our systematic research of unpublished materials from the Bratislava City Archive, we could uncover and explain the course of the fire of the tower of the Bratislava’s cathedral in 1833 and other related information. The published facts offer evidence of precise administration of our ancestors and the importance of preserved memoir sources. Furthermore, they underline the great importance of archival written documents for interdisciplinary research of the history of architecture. In this respect, the primary contemporary materials constitute an irreplaceable source of relevant and complex information not just about the buildings themselves but also about the so-called personal background of their investors, planners, builders, craftsmen, artists and other people and any related events.