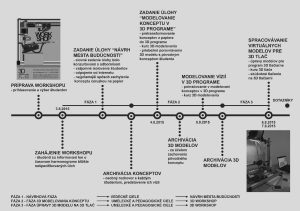 The article is dedicated to the experimental 3D Workshop (it took place from 3.8. – 8.8. 2015) which represents one of the research methods of the dissertation thesis Film cities – Visions, Utopias, Futurism. Up to now, research lacked practical verification of couple of anticipated conclusions, which can be observed through the practical workshop. There is an assumption that people’s visions about the future cities are determined by the existing movie images of future cities. Impact and degree of influence of these film visions can be tracked by examining student’s works. After introductory theoretical preparation, each student was given the task of designing a fragment of their own future city. Virtual models made by students will be transformed into the physical models through 3D printers. In conclusion, all the fragments of the future city are analysed. The aim is to observe and to describe the way the sci-fi city visions are projected into the student’s future city visions. The project has scientific, artistic and pedagogical goals and objectives. After fulfilling all the aims, the workshop will provide new irreplaceable materials for the final thesis and means an important interdisciplinary cooperation.