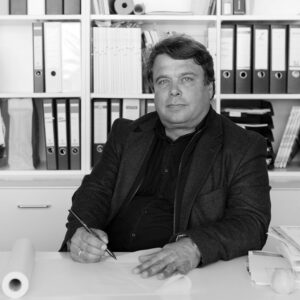 The significance of preserving cultural identity is one of the main topics of this current issue of Architecture Papers of the Faculty of Architecture and Design STU (ALFA), with articles ranging from analyses of urban spread and architectural heritage of the Saidpur village—one of the oldest in Pakistan—to discussion of the loss of cultural identity in the Southern Slovakian regions and efforts to save it through design and local artistic creation. In addition, contributions are provided on augmented reality and tangible user interfaces as an extension of computational design tools as well as on the importance of cultivating soft skills in design education.

Although on the surface of it, these articles may appear to be only tangentially connected to yield a common thread in this issue of ALFA, a closer inspection reveals multiple crosscurrents that intertwine each article with the other much tighter than one might think. As the world’s population grows exponentially and becomes more diverse, coupled with advances in digital technologies, increasingly wide-spread industrial production, and rampant yet inescapable globalisation among nations, local traditions are unavoidably challenged in many corners of our planet to a point of loss of cultural identity. However, it is not just local traditions, regional differences and particularities that are under pressure, but also earth’s resources, the environment, along with human social relationships in the daily conduct of our lives, our private spheres, and ultimately the general sustainability of the human existence as we know it.

There are certainly noteworthy efforts to mitigate the negative anthropogenic impacts on the environment, specifically within the building industry and its related sectors as many countries set requirements for sustainable design and energy performance of buildings and the assessments thereof. Consequently, there is a large number of standards, possibly more than appropriate, that architects and engineers are proscribed to follow. However, such standardisation can also have negative impacts on local cultural identity as it attempts to have an equalising effect across indigenous knowledge bases and differences where equalisation may not be needed. The imposed increase in entropy that removes local differentials and attempts to ‘unify’ design knowledge, building methods, methodologies, and overall conception of the idea of building appears to ignore and stand in regrettable contradiction to what has taken millennia to develop. It is true that the nature of the human habitat is a dynamic concept as it has been evolving continuously in various dramatic forms. Yet, we now appear to have arrived at the threshold of the great transition to ensuring a more sustainable future where homegrown knowledge in achieving the goals of sustainable human habitats all over the world can be critical in reconciling inevitable growth with preservation.

A truly sustainable building calls for individual site-specific solutions that are developed respecting regional otherness. Both architects and engineers must therefore train and be cognizant of the significance of sustainable planning in order not to become mere ‘decorators’. To that effect, it is imperative to not only develop soft skills in design education, but also to be able to use state-of-the-art technologies that allow a full immersion into design, for example in the form of augmented reality. A world that is becoming closer through globalisation and digital technologies offers great opportunities in this area. Through the disappearing of borders, architects, engineers, urban planners, and locals get a chance to work together, cooperate, enrich themselves by learning from each other; understand and respect different architectural languages that would increase our creativity in the final analysis, allow for more tolerance, and enhance our perspectives by respecting local traditions and cultural identity. The flow of all this is only possible where entropy is small.

In the present issue, in the paper “Saidpur village through architectural lens: Deciphering urban pattern and architectural heritage”, Ramsha Nazir Malik and Zhang Haiao endeavour to collect and preserve current and old accounts of Saidpur’s urban growth and architecture. Saidpur is one of the oldest villages in Pakistan that contains the architectural art and culture of three religions: Sikhism, Hinduism, and Islam. The study is based on research through interviews, surveys, and onsite data collection, presented through images, drawings, records and mapping, survey infographics, tables, and analysis diagrams. Ramsha Nazir Malik’s contribution attempts to collect, generate, and record information on evolution, history, vernacular architecture style, and heritage architecture of Saidpur, and to promote and present data for further heritage conservation and protection work in Saidpur.

Martin Uhrík, Alexander Kupko, Michaela Krpalová and Roman Hajtmanek contribute a very interesting article: “Augmented reality and tangible user interfaces as an extension of computational design tools”. The paper envisions the use of augmented reality as an interactive and communication tool implemented in the architectural design research, education, and practice. The current knowledge and various applications of this immersive technology in the theoretical and practical field are summarised and focused on a very particular kind of the implementation of augmented reality called ‘tangible user interfaces’ in a computational design context. The outcome of the research is an adaptation of the originally GRASS GIS powered tool Tangible Landscape into Grasshopper 3D environment, more accurate and suitable for the architectural design workflow by means of 3D computation, algorithmic modelling and different scale management.

In “Redefining the learning experience within the design education at Slovak University of Technology in Bratislava”, Michala Lipková, Zuzana Pergerová and Zuzana Turlíková present data gathered in an extensive survey on the future of design education investigating the key skills, knowledge and abilities of design students and recent graduates. The survey was conducted among current students and alumni of the Institute of Design at the Faculty of Architecture and Design of the Slovak University of Technology in Bratislava, followed by interviews with pedagogues, company representatives and Human Resources managers. The survey, among other questions, investigated the essential, key knowledge and capabilities of a well-prepared and competent design graduate of the future. The outcomes have led to identification of an essential soft skill set for a young design graduate.

In his study entitled “Potential contribution of design in strengthening of regional identity in Southern Slovakia”, Tomáš Páriš and Veronika Kotradyová delves into the gradual loss of cultural identity as an undesirable but common reality in many regions of Slovakia, specifically, the Novohrad region where the society is potentially advancing too fast through new technologies, creating new habits. As a result, the authenticity of the original culture is suppressed at the expense of development and growth. Nonetheless, Tomáš Páriš and Veronika Kotradyová show how modern technologies and procedures may be able to help local cultures flourish. Through extensive research of tangible and intangible heritage, using structured interviews and field research, the designer can create a sufficient picture of the researched area. The results of this creative process are products that follow the design language of the area with a specific morphology and material composition. These products can also take the form of services and systems that help regional development.

It should be obvious to all in our profession that we need to take more responsibility based on sustainable planning and building in the preservation of our cultures and traditions as those manifest themselves in the architectural expressions in our communities. I wish for this and future issues of ALFA to provide valuable contributions in the transition to a climate-neutral architecture. Enjoy another excellent issue of ALFA.