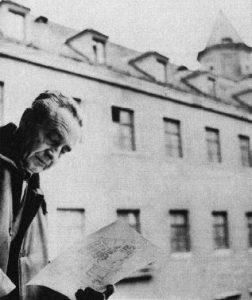 The issue of the Restoration of the Bratislava Castle is always connected with the person, who, at that time, led the reconstruction and design works on the castle. Individual parts of the reconstruction can be defined as five restoration periods or  five stages. Dušan Martinček, an architect, preservationist, pedagogue and also a versatile artist, brilliant photographer and publicist, was the leading person of the second stage. This was characterized by combination of several restoration methods. In the first phase (1950s – 1960s), the ruin was consolidated, extended and the fortification character of the castle was restored, while the Baroque originals were kept. Later (1960s – 1970s), the Modernism entered the restoration process for both ideological and pragmatic reasons. Dušan Martinček worked as a leading architect for 18 years in Stavoprojekt Bratislava, the studio for reconstruction of monuments. The reconstruction of the Bratislava Castle was his most significant project. He himself labelled the reconstruction as the largest and the most beautiful work of his life. He took the leadership after Alfréd Piffl and led the works on the castle from 1958 to 1976. He left the continuous cultural layer and several remarkable architectural interventions. The recent restoration lasting up till now has removed most of these interventions for several reasons. The last task, that he was involved in with full concentration, was the design of a new entrance to the Castle palace from the northern terrace on which he promoted the reconstruction of the original Baroque garden. Dušan Martinček stayed connected with the Castle, even after he left the position of the main architect of the Bratislava Castle. Through the position of the main consultant for the castle restoration, he published, monitored the building works and making up of the details.