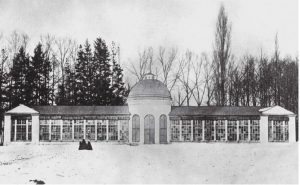 A unique landscape masterpiece can be created by a lot of specific elements. They can influence the landscape scene. The composed historic landscape is one of the phenomena, which has arisen thanks to human wisdom and respect to landscape. The manor in Mošovce town is one example of such a human aesthetic participation in land use.

The first important natural element which can influence the historic landscape is topography. In case of the historic landscape in Mošovce, the plain terrain influenced the land for an agricultural usage. An open, agricultural country was the result of agricultural utilization. The garden masterpiece is composed in contrast to open agricultural country. It is represented by closed character. This contrast is a result of the ambition to create a green oasis in contrast to the plain and weather-beaten soil. The concept is closed and richly articulated to an inner garden. But it does not mean that the composition is finished there. The garden communicates with its surroundings by the long-range ways bordered by alleys. The structure of interlocked green lines reminds of arteries, by which the energy pulses from and to the garden. The historic garden composition is thus not sunk in the landscape as it in the example of Štiavnička manor, but it is centralized to one point. From the compositional gravity centre it is shot out to the landscape by alley rays. The alley geometric structures (all with a strong functional context in history) give the landscape a unique identity.

Water is an equally significant phenomenon in the garden composition as the previous landscape attribute. It is very interesting to see how natural it becomes a member of a garden composition. The historic water works in Mošovce manor have mostly functional character. However, the preserved historic pictures show beautiful pond sceneries e.g. an idyllic lover island or the composition of calm path lines flanking the ponds. Creativity and a piece of heart are presented in all elements.

An integral part of the landscape creation is greenery. The historic garden masterpiece in Mošovce seems like if it was created by Slovak nature. A woodland character is alternating with clearings, water ponds and mountain views. The garden has successfully avoided a time period of intensive plant introduction. It is a great example of common tree species use. As for the tree composition there is a strong contrast between the natural scenes inside the masterpiece and the landscape open space surrounding. The contrast and harmony feature is also felt in the alleys system. The geometry symbolizes system and hierarchy, but wayfaring on the paths lined by alleys, accompanied by leave whisper and shadow under the trees, has a very romantic character.