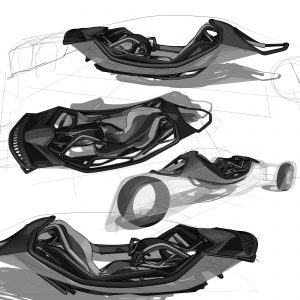 The following text outlines a collection of observations made at various occasions between 2017 and 2020, which include onsite workshops at automotive design studios such as Volvo (April 2018), Volkswagen (November 2018), and Opel (July 2019), where I worked with professional designers from both vehicle interior and exterior departments. These events focused primarily on the ideation phase of the design process, VR integration in this context and VR blend with a complete design pipeline.

Ideation, especially in sketching, plays a natural role in the forming and sharing of an idea across virtually all fields of creative activities. We accept the sketch’s visual form as a critical component of the architectural design. It is generally present in the product design process. It can also be a distinctive discipline of the fine art; however, it does not stop there. Sketching is a basic form of visual communication in everyday life; we share ideas and concepts. Although the word “sketch” may also refer to a record of a musical or performing art concept, it is essentially the sketch in its visual form that accompanies humanity across cultures and professions. It is also more than just a simple art form down to which is often reduced. I focus on the role of sketching mainly as a tool to generate ideas, and I assess how digital technologies, namely virtual reality, can contribute in this field.

Although the ideation appears to be indivisible, my observations suggest that it can be divided into four consecutive steps or stages: Mapping, Exploration, Explanation, and Persuasion. In Mapping, we get familiar with the assignment and the context; in Exploration, we explore possible solutions. The Explanation is a stage for evaluation and clarification, and finally, Persuasion; when the idea is already formed, we present it further.

Mapping sketches help designers orient themselves, analyse the context, and learn about the spatial relationship. These VR sketches typically lack any clarity, which is intentional, and they literary represent the map of relations, spatial configuration, ergonomics, the accessibility of specific areas, etc. At this stage, the role of the physical body appears to be very important.

The Exploration sketching—this is the stage where the expressive ambiguity is crucial for subsequent design decisions. In this phase, we examine our maps and assign them meanings, functions, or hierarchies. Designers use ambiguities for different interpretations, which are then used to generate various alternative designs.

Explanatory—As the designers continue to experiment with form language and gradually refine the design, it is possible to observe frequently that their designs are accompanied by their spoken commentary. The designers thus use verbalization as a tool that helps them in shaping the design.

Persuasive—At this stage of the ideation process, the formation of the idea is usually over. The designer’s last task is to convert these relatively unrestricted sketches into an art form in which clarity and legibility prevail. Although the design is still more of a concept at this stage, thanks to VR, digital data is fully 3D and can be used directly for further processing, such as visualization or prototype production.

In conclusion, I would like to state that the contribution of VR to design ideas seems more than beneficial, and emphasize the fact that the observations have been consistent with the results of research in the fields of cognitive psychology. Prof. Barbara Tversky refers to gestures as spatial actions that play a significant role in human cognition and analyses them in our given (creative) context, while observing architects performing simple design tasks, as they add gestures and verbal comments to their sketching act. Furthermore, her observations were independently reproduced by Dr. Vinod Goel, who also included digital tools in his experiments. In addition, these findings match the conclusions of leading experts, such as Bill Buxton. Finally, I would also like to say that placing these observations into the context of contemporary neuroscience has also gained significant support.

Needless to say, although this correlation indicates the link between the human ability to generate new concepts (to ideate) and spatial actions, we still need to continue with these observations and collect more evidence from all three angles: research on design, cognitive psychology, and neuroscience. Such a multidisciplinary approach appears to be a viable path to learning more about human creativity and describing it as a proper scientific subject.