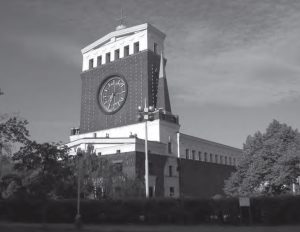 The article deals with Czech sacral architecture, in particular, historical moment. Because of the slow movement in the architectural area in comparison to politics, a certain zone of immediate historical period is chosen, which corresponds to the speed of architectural evolution. The midpoint of this imaginary zone on the historical axis is the year 1918, the year of political establishment of independent Czechoslovakia. In the present work the church architecture and the architecture of related buildings is studied mostly from the viewpoint of reactions on the progressing society events.

After the political establishment of the Czechoslovakia, there are two basic contradictory relations with an international architectural context. The first of them is the acceptance and co-creation of the formal language of the European avant-garde, the second than the conservative traditionalism formed by the local conditions and requirements. The avant-garde created the same formal language across the borders of all progressive European countries marked by simple white-plastered volumes without any decoration. The national traditionalism in the opposite tried to form a local formal style suitable for expressing the dignity and values of the new state and at the same time integrating inspirations from local folklore.

It is an irony of modern history, that the first chance for the Czechoslovak culture to build an original national style was after the World War I when most of the Europe tried to start a brand new epoch and forgot the disappointments of the past. Anyway, these were the two decades of liberty between the World Wars during which the young Czechoslovak democratic culture could stand in the first line of European cultural development.