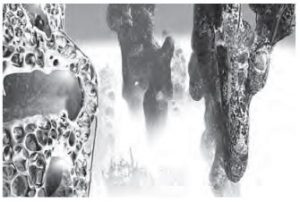 Today our world seems to be unstable and full of changes. The system, in which we have believed in, provides us no longer with the feeling of security. Some talk about the end of the world, others about conversion. How does architecture response to these changes? Does it response at all? Are the instability and uncertainty dominating also in the world of architecture? Can architecture get anything from this situation?

In the early 1990’s, there were several fundamental changes in our society. The Cold War finished and the separation of the world into East and West ended. The globalization has been further strengthened by the world wide web availability to the majority of people. In the world of art and architecture prevailed interactivity, there were created open source communities based on the free information exchange. The meaning of creation and originality has changed. The development of computer technologies has brought unprecedented opportunities into the world of architectural design. After the initial excitement from the new opportunities, at present we are experiencing return to the traditional way. The computer is like a tool, a mediator between man and nature. The interest of experts is increasingly exploring the wild natural intelligence. The dominance of Euclidean geometry is weakened by the extension of non-Euclidean geometries. It changed our understanding of space. These changes led us to a significant discrepancy between architectural visions and the reality of construction, which finally resulted in the crisis of tectonics and scale. Some consider it as application for an alternative tectonics; others are trying to return to the basis of architecture in geometry. Some are experimenting with new materials and technologies.

Perhaps the world of architecture is experiencing a crisis too, but as the Swiss writer, playwright and architect Max Frisch said: “A crisis is a productive state. You simply have to get rid of its aftertaste of catastrophe.” [1]