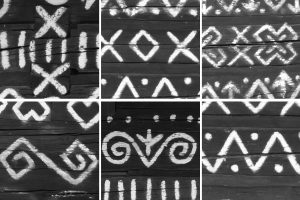 The aim of the article is to map the development of ornaments from Čičmany village, their “journey” from the past to the present day, as they are currently the most used Slovak folk pattern, especially in the graphic and product design.

In the beginning, the author explains why she is interested in this topic and how it is connected to her dissertation theses. Before discussing the topic as such, it is important to define and clarify the basic notions of symbol and sign and a take a closer look at the concept of ornament and its function and types.

The following section offers a brief introduction of the village that has kept this local tradition that has become known world-wide and the eye-catching ornamental decoration of the outer walls of log houses in Čičmany. Although it is a unique locality, similar artistic expressions have appeared in other regions of Slovakia and also abroad. However, the traditional geometric ornaments can be found only in Čičmany. The time of origin of this tradition is questionable, because while the locals speak of centuries, Vilém Pražák, who focused on the research and analysis of architecture in Čičmany, dated it back to the first half of the 18th century and the beginnings of the construction of multi-storey log houses. The paintings were linked to the processing of materials used in the construction of the houses. Another question is the primary function of these paintings. It is more than clear that the paintings were created predominantly as a protective coating against moisture. Experts also discuss their possible magical function, as there were different symbols that each woman adjusted. Many experts attribute the origin of these paintings to the foreign provenience of the region’s first inhabitants who could have brought this tradition with them.

The paper then describes the division of ornamental decorations into 3 stages, as they were first described by Pražák, since the approach of painters was not always the same. The paintings were influenced by the contemporary trends in construction, the time period, and it was likely that they would fall into disrepair. However, the natural elements that have affected the area over the years and left their traces behind were also ultimately responsible for the renewal of the tradition. The most famous person who contributed to this was Dušan Jurkovič, who was referred to as “the discoverer of Čičmany as a remarkable ethnographic locality”. He was responsible for the increased visibility of this village; thanks to him it was discovered by other people of prominence, but he was also the person behind its “rebirth” after a fire. He was mostly keen on preserving the decorative tradition, and based on his recommendation, only classic log houses were built and their painting in a traditional but somewhat newer style was also supported. The modern history of the village is slightly confusing. Although it has become a tourist destination for both domestic and foreign tourists, or for experts who are currently working on their projects there, the population of the village has been decreasing. Fortunately, the tradition is maintained because of young enthusiasts.

Another important element of the local tradition is embroidery. After the basic description and analysis of its colours, the focus shifts to individual ornaments. They have local names and are “transferred” from the embroidery to the walls of local log houses. Although the symbolism of the ornaments used on the houses is questionable, it certainly had its place in the embroidery. The meanings of the symbols can also be relevant to its use in the design, so it is appropriate to at least explain the basic elements. Common symbols include a diagonal cross, a heart, or various spiral variations. The most common zoomorphic element is a rooster.

After presenting a small part of the many symbols that the painters individually modify as appropriate and which are used in Čičmany embroidery and ornamental decoration of the outer walls of log houses, the author moves on to the current use of the ornaments in graphic and product design. Examples have been selected with the aim to illustrate a wide range of their applications. Elements from the Slovak national Olympic team clothing collections are presented, the first of which, in 2012, triggered the interest in Čičmany ornaments as a source of inspiration. Many textile products have similar ornaments, a series that is rather extraordinary in its design has been chosen as an example, together with a project of artists that design souvenirs, which has spread out into other regions of Slovakia. A sample is included also from the “Kruhy na vode” competition, which is regularly organized by ÚĽUV (the Slovak Folk Art Centre). Slovak brands with world-wide recognition or international companies with products for Slovakia are also mentioned in the paper. There are two views of the book, which contains the Čičmany ornament. As regards the graphic design, two fonts and logos based on Čičmany ornaments are described here, as well as several posters and prints for local events, together with the latest visual art focusing on visual identities inspired by the Čičmany pattern.

In the conclusion, the author presents opinions of a designer as well as a former mayor of the village on the topic of Čičmany ornaments, assesses the use of this source of inspiration and offers a vision for the future.