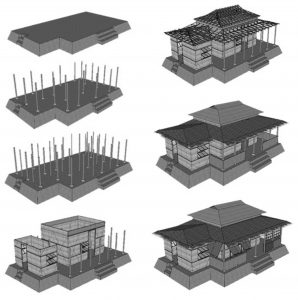 Climate change has adversely impacted the occurrence and frequency of natural hazards, which is currently a prime global concern, particularly in low-lying countries. Bangladesh’s coastal communities are historically and geographically vulnerable because of periodical cyclones and storm surges associated with salinity intrusion, flash-flooding, and water-logging. Moreover, due to adverse climate change, the vulnerability of the coastal zones is anticipated to be even higher in the future. Despite improved evacuation management and adequate cyclone shelters patronized by donors, lately resulting in a reduced mortality rate, the property and economic losses are still substantial due to the vulnerability of the settlements. Alarmingly, psychological damages caused by those disasters are immeasurable and it would take a long time to recover from the post-trauma. Even a single disaster could make the entire life of the community miserable. As an immediate initiative for disaster risk reduction, numerous cyclone shelters were constructed in the coastal region of Bangladesh.

Nevertheless, lately, the inhabitants have been reluctant to leave their possessions at risk and transfer themselves to the shelters. As a consequence, several researchers and professionals insisted on and prioritized the construction of cyclone-resistant homesteads. Unfortunately, their proposed structures, selection of materials, and construction techniques proved expensive for the economically vulnerable inhabitants. Besides, studies on synthesizing culture, technique, and affordability to achieve a sustainable cyclone resilient model were also limited in the particular context. As the short-term adaptative approaches such as migrating to the closest cyclone shelters have failed to sustain resilience, comprehensive and inclusive mitigation planning should be implemented to achieve more resilience in the long term.

This research  is focused on the architectural interventions to encounter the critical challenges faced by the south-eastern coastal communities. The aim was to develop a cyclone-resilient settlement by providing them with the resisting and recovering capacity from the prolonged impacts of cyclone-induced disasters. The beneficiaries would adapt to a life with disasters. To encounter the catastrophe, they would have to reshape their lifestyles accordingly. The research was primarily designed in two phases to attain the research objectives: (i) vulnerability assessment and settlement analysis, and (ii) architectural synthesis for achieving a cyclone-resilient settlement.

A physical survey was conducted during 2020-2021 in an extremely remote coastal village in Bangladesh for settlement and vulnerability analysis. Three predominant communities with varying occupations were identified: the fishermen, farming, and salt-producer community. The vulnerability in their settlements was assessed at two scales – macro (collective) and micro (individual) scale. The settlement and vulnerability analysis identified fundamental design issues, and architectural interventions were proposed accordingly. The design issues were categorized by three broader aspects of sustainability: environmental, social, and economic challenges. The adopted framework for the architectural synthesis incorporated the resilient homestead, cluster development, and landscape master plan to achieve self-sustainability.

The architectural synthesis followed a participatory and polythetic approach through integrating technical innovations with community engagement, ecological interventions, and traditional practices. The proposed resilient homesteads would serve the basic functional demands in ordinary times and survive during moderate to regular cyclones. Even if the built forms might get partially damaged during severe to super cyclones, the houses could be repaired rapidly and easily because of lightweight and low-cost materials. Unlike the south-western and central coastal regions, the protection with mangrove forests was absent in the south-eastern coast, making it more vulnerable to high wind and tidal surges. A defensive landscape plan was developed through coastal afforestation with windbreaker trees at a safer distance from the housing clusters to reduce high wind impact. The financially stable households in the community were encouraged to provide shelter during emergencies. As disasters should be encountered collectively, increasing community interactions with shared activities and functions was highly appreciated. Consequently, through cyclone-resilient built form design, defensive landscape planning, and community development, the coastal communities of south-eastern Bangladesh would be able to reduce vulnerability, enhance their resilient capabilities, and induce self-sustenance. This inclusive design process could also be implemented by similar vulnerable communities in other contexts to adapt to the changing climate.