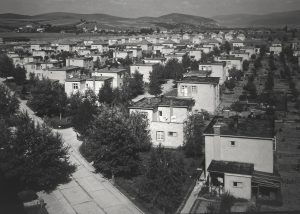 The town of Partizánske, formerly known as Baťovany and built according to the design of the urban development (zoning) plan of architect Jiří Voženílek (1909 – 1986) from 1938, represents a unique urban-architectural achievement not only in the context of Czechoslovak functionalist architecture, but also with regard to the emergence of modern European cities in the first half of the 20th century. Its original Baťa image with the remarkable idea of ​​a linear industrial town and a number of structural and building innovations in the field of architecture, such as modular construction, prefabrication, brick design, unique construction system, etc., co-create the town’s identity even after so many years and its original urban, architectural and historical value is still apparent. If we do not protect these values, the town will gradually lose its identity. In this respect, the key aspect is the re-identification or (re)vision of the historical, architectural-urban, industrial and cultural values ​​of the original industrial town concept and the subsequent confrontation of this model with the current demands of the town residents as a way to rediscover the disappearing identity with an emphasis on preserving and maintaining the exceptional values of Baťa architecture and urbanism. The formation of Baťovany is linked with architect Jiří Voženílek (1909–1986), a graduate of the Faculty of Architecture at the Czech Technical University in Prague. On 20 April 1937, he started working for the Baťa joint-stock company in Zlín. He gradually worked his way up, becoming a renowned architect and urban planner with successful projects even outside of former Czechoslovakia. Voženílek’s works of urban planning reflected the uniqueness of Baťa architecture. His Urban Development Plan was designed in 1939 – 1943 according to the principles of an ideal industrial town. Modifications to the original urban development plan followed a short time later. Both the emerging development of the town in years 1941 to 1947 and the construction in the 1960s followed the principles of Voženílek’s concept. The biggest changes took place in the period of 1960 – 1990. Socialist neighbourhoods no longer respected the original urban development plan, as did the high-rise residential building in the centre of the main square.  Partizánske (Baťovany), is an example of one of the few ideal industrial cities of the world, and can still project its unmistakable identity and character of the Baťa area, despite the inappropriate interventions made at the turn of the 21st century. This observation is made primarily by various specialists and other professionals, however, the attitude of the residents to this academic perception of the identity of the town is somewhat mixed. Current urban concepts and regulations do not contribute to the preservation of the town’s identity, nor do they lead to sustainable town concepts of the future. Baťa identity consists of the following phenomena, which are still apparent in the image of the town of Partizánske: the unique history of the town connected with the world-famous Baťa joint-stock company, exceptional urbanism, including the square with the dominant church by Karfík, the architecture of the industrial complex and the construction module of industrial buildings 6.15 x 6.15 m, Baťa residential architecture and also the inhabitants of the town who perceive this identity as their cultural heritage. Červená Street serves as an illustrative example of how the identity of Partizánske can be worked with in the present. The street is located in a part of town where – even without cultural heritage protection – the original single-family houses have (at least partially) kept their unplastered brick facades, including the materials used and the spatial structure of the objects. What contributed to this was the fact that this location has retained a collective awareness of its uniqueness and the need to preserve its identity. What tools can the residents and the municipality use when renovating and extending the buildings so that the town’s unique character is preserved? New information and research show us effective ways to approach the protection of cultural heritage which will allow the public and professionals to preserve the identity of the town and the place. To this day, Partizánske has not adopted any concept of functional territory or object-focused monument protection of Baťa heritage. As to the possible solutions regarding monument protection and preservation, restoration or reconstruction of the original Baťa architecture, there is a lack of open communication between the Monuments Board, experts – historians, architects and urban planners, town councils, civic associations and town residents. In this context, our research also focuses on cooperation with the inhabitants of the town and introduces them to possible solutions for the preservation of the unique architectural, urban and cultural heritage. Public participation (mental maps) and a manual to Baťa architecture in Partizánske could also help, which could facilitate the way to achieve the protection of a unique phenomenon. Without any protection for the objects and areas relevant to the town’s Baťa heritage, the town’s identity will gradually disappear, and we will lose unique architectural and urbanistic values, which – as cultural heritage – are of European or even global importance.