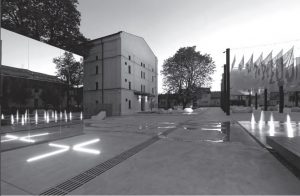 This paper explains the importance of barrack objects and campuses and their role in forming the urban structure of the city.

Construction of army barracks, as we know them today in the area of recent Slovakia, had begun in the period of wars against Turks. They were initially built as castle fortifications, which have been later transformed into the modern war cities with their own urbanism and strict building composition, serving the needs of the army.

In the first half of the 19th century, barracks were still covering just a small part of the army accommodation and the rests of the soldiers were hosted by civil families. Army was trying to solve this problem with construction of the simple wooden barracks, situated on the periphery. In the year 1866 Habsburgs lost the Prussian-Austrian war, which caused important changes in the policy of the monarchy and led to the establishment of the national service two years later. This event activated a huge competition among the cities to obtain the biggest numbers of soldiers and build as many barracks as possible.

One of the reasons of their interest in this type of buildings was the financial support guaranteed from the state, derived from the amount of soldiers located inside the city. On the other hand, army was bringing to the cities a great income of money in the form of the food, construction and other supply contracts. Relation between the army and the city was convenient also for the soldiers in terms of better supply and bigger possibilities for their cultural and social life.

In the second half of the 19th century barracks started to be more specialized. Simple wooden houses were undergoing reconstructions and their wooden parts were replaced by brick walls, other existing objects were modernized and extended. Except that, new types of buildings were created. Buildings started to be divided according to their functions, which were also projected in their specific shape. New form and development of this specific type of architecture influenced also the shape of the city structure. Castle fortifications, defying the city boundaries, were replaced by campuses, which on the contrary extended the urban structure.

Nowadays, the termination of military service and its transformation to the professional army few years ago reduced an amount of buildings used by the army. Especially barrack campuses, designed for permanent military accommodation, became in a short time just a heaps of neglected shelters. However, only understanding how great was their role in our history will help us to uncover how much of values and potential for future city development is hidden in this type of architecture.