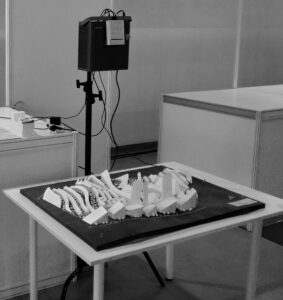 The paper envisions the use of Augmented Reality (AR) as an interactive and communication tool used in architectural design research, education, and practice. It summarises the current information and various applications of this immersive technology in both the theoretical and practical field and focuses on a specific type of AR implementation – Tangible User Interface (TUI) in the computational design context. In 2022, Philipp A. Rauschnabel’s research pointed out the ongoing confusion in the terminology. In his most recent paper on the topic of Mixed Realities, theoretical definitions are confronted with current industry practices. Rauschnabel acknowledges the ideas of Milgram and Kishino, resp. Schnabel and Seichter, along with various other viewpoints, labels their approach as “MR-centred view” and brings up its potential problems. He argues that AR and VR have opposing designer goals and user experiences, therefore cannot be united under one term. In his article, he introduces the term xRealities (XR) as an umbrella term for AR and VR. Despite the long history behind the idea of XR, the concept itself was not feasible until recently, mainly because of the unavailability of underlying technologies, including necessary processing power and sensors and because of the high cost of licensing of existing toolsets. Widespread adoption of handheld mobile devices such as smartphones and tablets possessing some of the necessary features including orientation sensors, high-quality cameras and microphones and location-based technologies has led to increased availability and affordability of XR-based tools. The article explores existing AR and VR technologies and toolkits with varying degrees of availability, affordability and skillsets needed for their usage. It covers multiple types of AR and VR technologies, including tracker-based optical AR using ArUco or QR markers, usage of a multitude of sensors in current smartphones and tablets and MR devices such as Microsoft HoloLens. Several degrees of interaction between physical and virtual environment using the aforementioned tools are presented. The authors explore possibilities and ways of encouraging students and the public to use and create their own AR experiences using freely available tools. Multiple libraries, SDKs and tools are available with a varying degree of usability, adoption, availability, and cost. Currently, multiple tools for creating XR experiences with varying degrees of creative freedom and learning curves are freely available. Multiple toolkits, such as Vuforia, AR Toolkit, or various software development kits (SDKs), including those of Oculus Rift or HoloLens, enable the highest level of modification and integration, with the main drawback being the need for highly advanced programming skills. A recently popular and widely used special type of tool combining AR and TUI in the collaborative modelling is tangible landscape. Tangible landscape allows users to model the scaled landscape by hand physically, 3D-scan it and virtualise it in a computer. The virtualised model can be used for various analyses or computation, which may be processed and then visualised back on the physical model, giving the users instant feedback. The tool is mainly used for landscape and geospatial modelling, and it is assembled with a mass for physical modelling – mainly kinetic sand, a projector, 3D scanner and a computer. The research in this article explores the possibilities of extending the utilisation of the tangible landscape beyond the large-scale planning into the architectural and urban planning domain. The use of different, more suitable software for architectural profession was a key factor in the adaptation of the tool for architectural use, as the originally-used GRASS GIS software was developed mainly for large scale geo-modelling. From the wide range of architectural software tools, the program Rhinoceros with plugin Grasshopper was chosen, as it is widely used by architects, and it is capable of the algorithmic modelling. The setup of the first constructed prototype of Tangible Landscape at the Faculty of Architecture and Design of the Slovak University of Technology in Bratislava, Slovakia, uses a projector, which allows simplification of the stand holding it and a 3D scanner, mounted directly on the projector in contrast to the tool’s predecessors from around the world. The use of the prototype has already shown that it improves communication during the collaboration as it blends the physical 3D and digital layers. The design is thus more legible and design decisions are more intuitive. Another aspect of the tool is its educational potential. Interactive engaging of the touch and visual senses has led to better understanding and remembering of the concept. Making the computational tools more accessible and intuitive for everyone is a way to use different approaches to design more widely.  The plan for follow-up research is to pursue its utilisation in modular and discrete architectural projects using components and designing from inside out, with possible implementation of Monoceros tool.