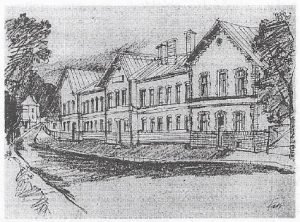 The era of railway transportation in Slovakia has begun with the arrival of the first steam train from Vienna to Bratislava on 20th August 1848. The Research and Development Institute of the Railways of the Slovak Republic has iniciated a survey of the railways stations and other railway buildings built along the Slovak railway tracks from the point of view of their architecture. The survey has started with typifying these buildings and their functional and spatial effects and defined 6 basic developing periods which are based on particular railway features as well as on landscape and urban features. Out of all approximately 840 railway stations, especially the middle and small railway stations have preserved the original or a little changed historic shape. It is still sensible to develop the system of protection in this field in order to preserve the atmosphere of historical railway stations and their cultural heritage.