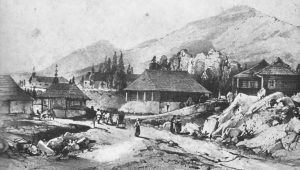 The traces of history in the alpine environment reveal how the colonization climbed up the terrains and transformed them into exploited slopes. The paper examines the reflections on architecture discourse in the High Tatras. Analysing the initial discussions while the High Tatras were part of the Hungarian Kingdom and mapping the implementation of innovations during the first half of the 20th century allows to reflect how the copied architecture from other alpine terrains was shaped over time into representations of early modernism. This work focuses on the untamed areas with no urbanization where only solitary objects – the huts – are built. Alpine huts are lighthouses in the mist. They still fulfil the role of emergency shelters despite becoming a goal of mass tourism. In these times when we are losing excellent architecture and unique environments are vanishing, we would like to highlight the buildings which are not the cover for our activities, but represent the activity itself. We study the huts in the context of architectural development in the region of the High Tatras. We do not claim the log and half-timbered houses as traditional or “the only true” Tatra architecture. It could be some first Tatra architecture, as the region does not have any original settlement to refer to. This paper examines the mapped objects from an innovative point of view. It surveys the new materials, construction methods, durability and weather-resistant features. Together with focus on the arrival of new architectural styles, the work creates a chronological picture of the building process in the High Tatras. The view of the unknown alpine terrains changed since the first researchers and travellers escaped there from the city. They followed the hunting trails and stayed in shepherds’ cottages. At the end of the 18th century, the first settlement was founded. The trigger to build an infrastructure were the healing waters. Another driver was reaching the summits. Despite the great spa potential, the High Tatras were not about to be a tourist centre. They were meant to be a strategic place to defend the northern border and the supply for the trade water canal. The railway changed everything at the end of the 19th century, with attractivity and increased availability, other settlements were founded, followed by arrival of the architects. The network of alpine huts was soon taken over by the Hungarian-Carpathian Association as an authority responsible for building new huts, maintaining and restoring the existing ones and planning hiking trails and access roads. Until the end of the 19th century, the huts were built traditionally, with local materials, mostly without architects. The only exceptions were the first Sliezsky dom house, hut by the Zelené pleso mountain lake and the Téryho chata hut. The paper surveys the architectural conception and analyses how the dialogue with the terrain, weather conditions, local materials and innovative process was applied in designing and building huts. In contrast to the eclectic free choice of the structures in the settlements, huts were excluded from this romantic tradition. The ornament did not climb up, with the only exception being Hrebienok, where Studenopotocké kúpele spa was built to the image of the half-timbered spa in Tatra settlements. It was also the only location where art nouveau climbed up to the alpine terrain. The beginning of the 20th century brought innovation into interiors, such as electricity and flushable toilets. Building construction returned to the traditional masonry from the trends of half-timbered houses. This type of construction allowed to use the house all year-round. Tourist winter season developed winter centres for leisure and sports. The arrival of modern architecture introduced functionalism, CIAM’s ideals, le Corbusier’s points, and started to apply Loos’s manifesto. The first hut in the young Czechoslovak Republic was built again to defend the border from Polish claims. Later, along with Czech contribution to a large-scale functionalism and Slovak small-scale functionalism alpine huts were forming the Tatra’s landscape. They were still loyal to the traditional techniques, even though as they climbed higher, they were increasingly more technically innovative. The topic of thermal insulation started to be a point of discussion since the huts were to be accessible all year-round. Recreation as social invention of the 20th century resulted in extension of the huts and building accessible ways to the peaks. Technical innovation of the cable car made its way into the High Tatras in the 1930s, built as an example of regionalist functionalism which responded to the condition of alpine environments. The traces of ornament were stopped in the lower altitudes with urbanization and accessibility as well as the traces of modernism. The huts in the first half of the 20th century remained independent from the tradition sustained in lower elevations and true to their harsh conditions. The trends in architecture were determined by the possibility of elementary transport, while alpine huts had to calculate with every option of local material as a building material. However, the construction of alpine huts represents more of an innovative modernist idea of spending time in illuminated areas. Alpine environment was the place where building style was determined by the vegetation zone, not the current trends.