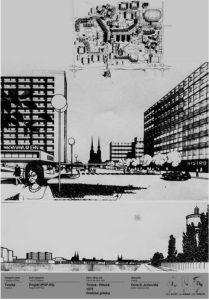 The paper is an attempt to reflect and visualize on the long-life work of the founders of the Slovak urban design school – the practicing architects Alexy, Kavan and Trnkus. The work responds to the exhibition of 3 Professors – Architects – Urban Planners Exhibit Their Selected Works (1965-1995) which was held at the Faculty of Architecture in Bratislava. The exhibition maps the key stages of their thirty-year long cooperation during which their projects succeeded in the Slovak and foreign competitions, they commenced research and are authors of many publications.

Symbolically – thirty exhibition panels covered three basic topics: Design, Research and Publications. As there was a lot of original material which the professors managed to bring up, the exhibition was extended of the presentation of their original blueprints and models of their selected works. The exhibition thus offered a unique picture not only of their urban concepts, theories and their transfer to the practice, but also showed some formal signs of urban design in the second half of the 20th century.

The selected works in the paper present 16 most important works which were also part of the exhibition. Among the key works undoubtedly belong – the urban area of Petržalka in Bratislava, a competition entry for extension of Vienna-South, or a competition entry for the residential complex in Trnava – Hlboká and in Brno – Bohunice. The selection of theoretical works focused on the basic research which aimed to define the greater central area of the town, while focusing at the demonstration of the theory of transformation on the internal urban structure; the process resulted in the definition of notions such as the bearing core system and the urbanization. Their research work, within the VEGA project, which was presented at the exhibition, dealt with the topic of localization and perception of the dominants on the axis of Ružinovská Street.