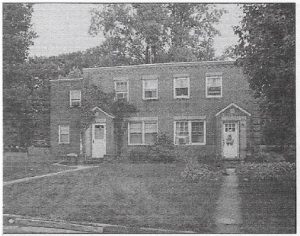 In April 1993, Vladimír Karfík from the designing studio of Baťa’s company flies with the company airline to Prague and from there to Paris, and from Bretagne to New York by ship. He has to fulfil an important task. During his previous journey to the US, Jan Baťa decided to build American Zlín on land on the Atlantic coast, near Baltimore, state Maryland. Karfík acts as a private developer and starts to realise the whole project. It was not finished because the main intention of Baťa was to go round the high import duties to America, and this has changed when the duty was decreased to one third. A new impulse comes in 1938 with the order for American army. In Belcamp a part of factory was built, hotel, hydrocentral, estate of double houses for workers. The whole project was finished when Baťa was extradited from the USA in 1941.